Donald Trump and Adolf Hitler shouldn’t be sharing political rhetoric. I mean, honestly, no one wants a modern Presidential Candidate sharing a similar line of thought with one of the world’s most hated dictators. But, the line Donald Trump is walking on is thin. Donald Trump wants to purge America of illegal Mexican immigrants and their children, most of whom would be considered American Citizens by birth. Donald Trump has a plan of massive deportation, clearing out all illegal immigrants in the short time span of 18 months to 2 years. Realistic logistics aside, this would create a nation wide man hunt, turning people on each other in order to essentially keep America clean.  Even Trump’s own website, describing his deportation plan, paints Mexican immigrants as criminals/rapist/thieves/. The plan even details how cities who do not cooperate in returning their Mexican immigrants will be cut off from Federal Funding.Trump will be initiating an “us against them” policy for all Americans, and it’s already working. With this political platform, Donald Trump is rallying those who are prejudice against Mexican people, people who fear that Mexican immigrants are stealing their jobs and those who simply don’t like people of a different color.

Widespread racism is also what guided Adolf Hitler’s rise to power. It’s hard to not draw a connection between Trump’s view of Mexican’s to Hitler’s view of the Jews. While being antisemitic was not new in Germany, ( or Austria, where Hitler was raised), and they provided an easy scapegoat for Germany’s problems. Most of the blame was placed on the Jews for the economic state of Germany, while there was no factual base behind this. Hitler rallied the nation’s racism of the Jewish people and catered to this ideology, gaining him popularity.  In June, 1940 the German Government created the Madagascar Plan, which detailed how Germany would deport all of it’s Jewish citizens to the island of Madagascar. It eventually become clear to the German Government how this plan wouldn’t be as simple as previously hoped, and was tabled. The plan was replaced by the Final Solution, which was the extermination of the Jewish population by mass genocide.

While I’m aware that Donald Trump is not proposing the mass extinction of illegal Mexican immigrants, neither was Adolf Hitler at first for the Jews. Perhaps the fact that Donald Trump is proposing an action that is frighteningly close to Hitler’s initial deportation of the Jews should scare us as is. Both Trump and Hitler proposed these plans in order to make their countries “great again”, believing this extermination would resolve their countries issues. Too close for comfort yet? What is further disturbing is that Donald Trump didn’t stop his race war with Mexican immigrants, he continued on to attack Muslim Americans, in a similar Nazi fashion.

First and for most, Donald Trump is rather bad at giving direction answers (Hitler had him beat there, the man was direct). Trump has a habit of mentioning ideas, and then dancing around questions that are posed later about that idea. He was done this sort of behavior with the idea of keeping track of Muslim Americans and Syrian Refugees (who are mostly Muslim). Donald Trump mentioned the idea of having a data base, to keep track of refugees and Muslims. Since saying that, Trump has been questioned by numerous reporters, asking for clarification. Trump dances around the answers, but addresses it in his rally in Birmingham, Ala (if you watch the rally, you’ll see that on this topic he largely makes no sense, continuing the dance around any certainties, but the crowd digs it), he says that he does want a database of Muslims/Refugees coming in, and surveillance on some American mosques. He concludes this statement with saying that “database is okay”, so in a grand fumble of words, he did side with a database on Muslim Americans. Keeping track of certain races does fall into line with Hitler’s ideology, considering he registered Jews and made them wear self identifiers.

Donald Trump would still have a ways to go to completely emulate Hitler’s political ideology. Although, the extremist behavior in Donald Trump’s campaign cannot be ignored. Even though the likelihood of Donald Trump being the next American President is slim to none (We can only hope), the fact that his racist and extremist ideology has following is disturbing. What does this say about a chunk of the American population? Would we be swayed into cruel politics against our fellow man as the German citizens once were, in the name of “Making America Great Again”? Could we start to scapegoat Mexicans/Muslims for all of America’s problems, as the Jewish people were to Germany? Perhaps in the 2016 election, our biggest fear in our candidates shouldn’t be if they share rhetoric with Adolf Hitler. Donald Trump, despite if we like it or not, has been the face of the Republican Presidential Election. Between sound bites, memes, and jokes at his expense, all we hear about is Donald Trump’s folly on the internet and other media outlets.  How loud he is, abrasive, racist, and sexist. To be honest, if I have to look at his unsettling, overly tanned faced one more damn time I’m probably going to projectile vomit. While that may be a strong statement, a style that Trump is used to, So why is he still around?

Donald Trump is routinely mocked and proved wrong for his political stand points. When asked about view points or statement’s he’s previously made, he attacks viciously, Shoving it off as no big deal, as if his opposition has no clue what they’re talking about. As seen in the above footage, Donald trump responds being confronted on his sexist remarks with catchy buzzwords. His use of “political correctness”, “power”, “brain”, “strength”, and “quickness” are met with applause from the crowd. Frankly, his response makes no sense, so why was it met by the GOP crowd with such encouragement? Because the Republican voters no longer want facts or thought out policies, they want a headline. The right wing voters are looking for some one to identify with, and to them it’s the man with the comb over who stands against political correctness. Republican voters can find something to identify with, they believe Donald Trump is just speaking his mind, and they find that it goes against the political grain, even if what Trump says is sexist or racist. What republican voters and the GOP don’t seem to fully realize is that Trump’s persona of “I just say what I think, I don’t have time for political correctness” is just another tool for election and to gain popularity. Donald Trump has done too much business to have absolutely no idea what he’s doing in the political field. His political success is not by accident,  or a side effect of his “unadulterated” personality. 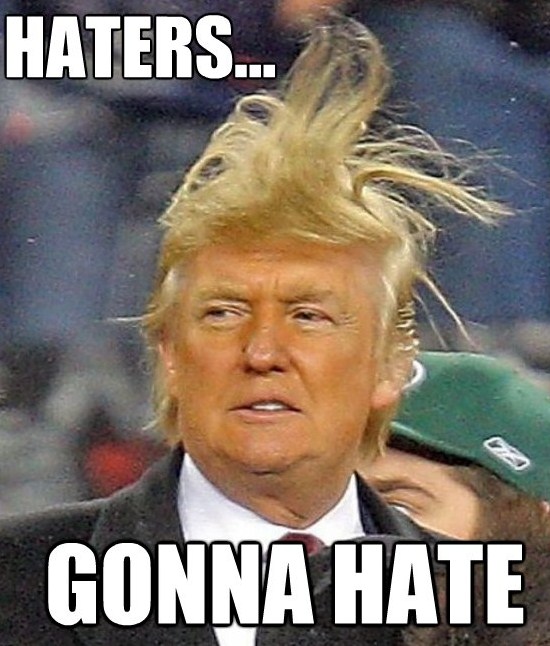 We live in a world largely dominated by social media and the internet. People on the internet see a buzz word filed headline and pass it onto their Facebook page. Then some one on their friend’s list sees that article, and shares it as well. All of this going on without reading the article’s content, which may go on to more in depth than what you may read in the headline. This is essentially the political style of Donald Trump.  Trump speaks loudly and frequently, often speaking like he’s writing headlines for political fluff articles. Building a wall around Mexico doesn’t make any sense, but it’s a strikingly powerful image for those who are racist against Hispanics and immigrants. With that quick line, he’ll have gained their support. Saying that the GOP moderator Megyn Kelly had PMS as the reason she questioned him against his sexist comments is appalling, but to every person that feels that women just get too bitchy on their periods, that could have been music to their ears.     ” We need strength, we need quickness, we need energy, and we need brain, to turn this country around”, he spoke in the GOP debate above. It really doesn’t make a whole lot of sense, but  it sounds good, and dammit, it’ll get him voters.

1: What do you believe has caused the GOP to become almost comical in their presidential elections? How does the parade of politics effect the Criminal Justice System, are the  issues  in the CJS being push under the rug for more sensational issues?

2. Is Volume over Substance going to become a new standard for politics? Is Trump just speaking loudly what many voters are quietly thinking, including blatant sexism. If so, what state is our country’s feminism in?