Sometimes referred to as “sentimental fiction” or “woman’s fiction,” “domestic fiction” refers to a type of  novel popular with women readers during the middle of the nineteenth century. The genre began with Catharine Sedgwick’s New-England Tale (1822) and remained a dominant fictional type until after 1870.  It derives in part from the eighteenth-century “sentimental novel” or “novel of sensibility,” of which Henry Mackenzie’s The Man of Feeling (1771), Oliver Goldsmith’s The Vicar of Wakefield (1766), and one of the earliest American novels, The Power of Sympathy (1789), written by William Hill Brown but ascribed circa 1860 to Sarah Wentworth Morton (Feminist Companion to Literature in English 766), are examples. In their reliance on the inherent goodness of human nature and the power of feelings as a guide to right conduct, these novels were in part a reaction against Calvinistic doctrines that viewed humanity as inherently depraved.

According to Nina Baym, who describes the genre in Woman’s Fiction, the basic plot of woman’s fiction involves “the story of a young girl who is deprived of the supports she had rightly or wrongly depended on to sustain her throughout life and is faced with the necessity of winning her own way in the world . . . . At the outset she takes herself very lightly–has no ego, or a damaged one, and looks to the world to coddle and protect her . . . .To some extent her expectations are reasonable–she thinks that her guardians will nurture her . . . But the failure of the world to satisfy either reasonable or unreasonable expectations awakens the heroine to inner possibilities. By the novel’s end she has developed a strong conviction of her own worth as a result of which she does ask much of herself. She can meet her own demands, and, inevitably, the change in herself has changed the world’s attitude toward her, so much that was formerly denied her now comes unsought” (Baym 19).. 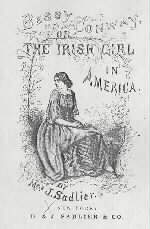 Baym suggests that the story “exists in two parallel versions. In one, the heroine begins as a poor and friendless child. Most frequently an orphan, she sometimes only thinks herself to be one, or has by necessity been separated from her parents for an indefinite time. In the second, the heroine is a pampered heiress who becomes poor and friendless in midadolescence, through the death or financial failure of her legal protectors” (35).Susan K. Harris has called this “the dominant novelist subgenre of the 1850s and 1860s, the type that Brown called ‘sentimental,’ Baym ‘women’s, and Kelley ‘domestic.'”

1. Plot focuses on a heroine who embodies one of two types of exemplar: the angel and the practical woman (Reynolds) who sometimes exist in the same work. Baym says that this heroine is contrasted with the passive woman (incompetent, cowardly, ignorant; often the heroine’s mother is this type) and the “belle,” who suffers from a defective education.2. The heroine struggles for self-mastery, learning the pain of conquering her own passions (Tompkins, Sensational Designs, 172)

3. The heroine learns to balance society’s demands for self-denial with her own desire for autonomy, a struggle often addressed in terms of religion.

4. She suffers at the hands of abusers of power before establishing a network of surrogate kin.

5. The plots “repeatedly identify immersion in feeling as one of the great temptations and dangers for a developing woman. They show that feeling must be controlled. . . ” (Baym 25). Frances Cogan notes that the heroines thus undergo a full education within which to realize feminine obligations (The All-American Girl).

6. The tales generally end with marriage, usually one of two possible kinds:
1. Reforming the bad or “wild” male, as in Augusta Evans’s

7. The novels may use a “language of tears” that evokes sympathy from the readers.8. Richard Brodhead (Cultures of Letters) sees class as an important issue, as the ideal family or heroine is poised between a lower-class family exemplifying poverty and domestic disorganization and upper-class characters exemplifying an idle, frivolous existence (94).

Clarence: or, A Tale of Our Times (1830)
The Linwoods: or, Sixty Years Since in America (1835; historical romance)
Didactic Tales: Home: Scenes and Charactors Illustrating Christian Truth (1835)
Live and Let Live: or, Domestic Service (1837)
Tales and Sketches, Second Series (1844)

Married or Single? (1857)The Linwoods

Baym says that Harriet Beecher Stowe should not be included “because the good women are not engaged in their own cause, either as individuals or in the interest of their sex, but in a cause where their own welfare is not directly involved or may even be endangered.  When juxtaposed with woman’s fiction, we see Stowe’s work as pursuing a course that sometimes appears to go against the secular and self-fulfilling current of the popular genre, especially in its emphasis on self-sacrifice” (233)

In “Sentimental Power: Uncle Tom’s Cabin and the Politics of Literary History” (in Sensational Designs: The Cultural Work of American Fiction, 1790-1860 [New York: Oxford U P, 1985]), Jane Tompkins argues for the significance of this form of fiction. Tompkins characterizes the views of such critics as Perry Miller, F. O. Matthiessen, Richard Chase, Harry Levin, R.W.B. Lewis as follows:

Twentieth-century critics have taught generations of students to equate popularity with debasement, emotionality with ineffectiveness, religiosity with fakery, domesticity with triviality, and all of these, implicitly, with womanly inferiority. In this view, sentimental novels written by women in the nineteenth century were responsible for a series of cultural evils whose effects still plague us: the degeneration of American religion from theological rigor to anti-intellectual consumerism, the rationalization of an unjust economic order, the propagation of the debased images of modern mass culture, and the encouragement of self-indulgence and narcissism in literature’s most avid readers–women . . . . In contrast to male authors like Thoreau, Whitman, and Melville, who are celebrated as models of intellectual daring and honesty, these women are generally thought to have traded in false stereotypes, dishing out weak-minded pap to nourish the prejudices of an ill-educated and underemployed female readership. (82-83)Tompkins opposes this view, arguing that “the popular domestic novel of the nineteenth century represents a monumental effort to reorganize culture from the woman’s point of view; that this body of work is remarkable for its intellectual complexity, ambition, and resourcefulness; and that, in certain cases, it offers a critique of American society far more devastating than any delivered by better-known critics such as Hawthorne and Melville” (83).

For other sites, go to the American Literature Sites page