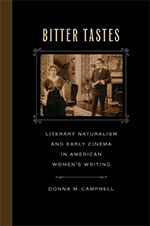 –Reviewed in Choice, April 2017: “Campbell’s analysis of the interplay between women authors (including screenwriters) and the medium of cinema is nothing less than astounding. The author covers a broad scope, including neglected writers such as Evelyn Scott as well as famous novelists such as Edith Wharton. Yet despite the incredible range of Campbell’s discussion, the book’s treatment of each element is meticulous in detail and gripping in presentation. Bitter Tastes should be required reading for any serious student of naturalism, women’s writing, or early film. Summing up: Essential. Upper-division Undergraduates through Faculty.”

Chosen as  an Outstanding Academic Title of 2017 by CHOICE.

–Reviewed by Molly Freitas in Studies in the Novel 49.2 (Summer 2017): 280-281: “Bitter Tastes is overall a truly impressive work, exhaustively researched and painstakingly argued. It is mandatory reading for literary critics of American women’s writing and naturalism, as well as for feminist and early American film critics. By invoking regional, sentimental, reform, and Modernist texts by American women writers, Campbell effectively explodes the parameters—and thus the reader’s understanding of those parameters—of naturalistic literature. However, by persuasively analyzing those texts through cinematic history and the commodified aesthetics of film production, Campbell makes an even more powerful argument for the necessity of interdisciplinary study as the best means to generate new forms of cultural understanding.”

–Reviewed by Katherine Fusco in American Literary Realism 50.2 (Winter 2018): “The quibble some readers might have with the book, that it contains material enough for two manuscripts, is also the quality that gives Bitter Tastes the authority to make synthetic claims both small and lovely—in farm novels husbands “control the money and houses . . . but wives control the pie”—and large and  eld-shifting—servant women in modernist novels remind “modernism of what it leaves behind and the naturalistic elements that it can never erase.” For scholars and students of turn-of-the-century U.S. literature, this is a book to return to, again and again.”

–Reviewed by Linda Kornasky in Studies in American Naturalism 11.2 (Winter 2016): “One may be quite sure that Campbell’s complex and nuanced emphases in this ambitious study—on women naturalists’ engagement with issus of reproduction, disability, and other biological matters—will lead naturalism studies into new terrain that will be worthy to explor further for many years into the future.”

2018 “Yours for the (Marriage) Revolution: Mary Austin and Jack London.” American Literary History and the Turn toward Modernity, ed. Melanie V. Dawson and Meredith L. Goldsmith. University of Florida Press, 2018. 248-272.

1999    “‘In Search of Local Color’: Context, Controversy, and The Country of the Pointed Firs.” Jewett and Her Contemporaries: Reshaping the Canon. Ed.  Karen Kilcup and Thomas S. Edwards. Tallahassee: University of Florida Press, 1999. 63-76.

2015    Newlin, Keith, ed. Garland in His Own Time: A Biographical Chronicle of His Life, Drawn from Recollections, Interviews, and Memoirs by Family, Friends, and Associates.Ames, IA: University of Iowa Press, 2013. American Literary Realism 47 (Winter 2015): 176-178.

2013    Introduction to Chapters 11-14, The Custom of the Country by Edith Wharton. The Mount. Web. https://www.edithwharton.org/programs-and-events/the-custom-of-the-country/. March 2013.

SSAWW-DH. Listowner and moderator of SSAWW-DH, a listserv for American Women Writers and the Digital Humanities. Created in partnership with Cari Carpenter and Carolyn Sorisio.

2016-17  Humanities Center Fellowship. “Digital Wharton, The House of Mirth, and ‘Wharton’s Other America.’”

Meyer Project Grant for 2016-17. “Digital Wharton: A Multimodal, Interactive, and Open-Access Companion Site to The Complete Works of Edith Wharton.”

2012    “The Revenge of the Repressed: Citizenship and Resistance in the Stories of Elia Peattie, Kate M. Cleary, and Alice Dunbar-Nelson.” Society for the Study of American Women Writers (SSAWW) Conference. Denver, CO. 10-13 October 2012.

“She don’t want no ‘doptin’ of yours”: Stealing Children in Alice Dunbar-Nelson’s “The Annals of ‘Steenth Street” and Ann Petry’s The Street.” Society for the Study of American Women Writers (SSAWW) Conference. Philadelphia, PA. 22-24 October 2009.

“It could have been any street”: Ann Petry’s The Street and Alice Dunbar-Nelson’s In ‘Steenth Street Stories.’ International MELUS (Multi-Ethnic Literature of the United States) Conference. Spokane, WA. 2-5 April 2009.

2006    “Narcissism for the Nation: Undine Spragg and Patriotism in The Custom of the Country.” Modern Language Association (MLA) Convention. Philadelphia, PA. 27-30 December 2006.

“The New Woman and the Tragic Muse: Agency and Artistry in “The Muse’s Tragedy,” The Custom of the Country, and Robert Grant’s Unleavened Bread.” Edith Wharton at Newport: 2000 Conference. Newport, Rhode Island. 21-25 June 2000.

1996    “Jewett and the Naturalists: The Country of the Pointed Firs Meets the ‘Masculine Principle.’ Sarah Orne Jewett and Her Contemporaries: The Centennial Conference.  Portland, Maine. 21-23 June 1996.

Interview. The World of Jack London. http://www.jacklondons.net/writings/Profiles/donna_campbell.html. Republished at https://donnamcampbell.wordpress.com/2016/09/13/interview-on-jack-london-from-jacklondons-net/

Interviews on Jack London for a film documentary on the author. Million Images films, producers of PBS documentaries. 5 July 2006 in Alaska and 10 October 2006 in Oakland, California.

INTERNATIONAL AND NATIONAL SERVICE TO THE PROFESSION

Delegate for Distance and Continuing Education (2012-2015)

SSAWW, Society for the Study of American Women Writers

TEACHING, SERVICE, AWARDS, AND GRANTS AT OTHER INSTITUTIONS