In the fall of 2016 three ME seniors, Ryan Pitzer, Jake Enslow, and Austin Rapp decided to contribute to the future of ME design at WSU. Originally tasked with identifying and developing a plan for a new design space, the three came to the realization that the opportunity for design in ME was not in the space, the current EEME 154 space was already adequate, the problem was in standardization of safe workspaces. After reviewing workbench design texts and consulting with faculty, students, and alumni, they realized the vision for the Cougar Lean (CLEAN) workbench system: an open source technology project that serves as a starting design project for ME students.

The CLEAN bench has an extruded aluminum frame rim which creates a jigging/fixturing surface over the entire benchtop. The frame allow for numerous customizations specific to the manufacturing/project needs. The students make a real engineering product that they then use for their capstone projects the following semester. This creates a positive feedback loop analogous to the farmer adage, “you reap what you sow.” These workbenches can be bolted together into island configurations or assembly lines based on need. From a pedagogical standpoint the entire system is analogous to the workspace mats and trays used by the Montessori system of education.

Assembling many of these tables into the EEME 154 classroom provides a new vision for the space:

In December of 2016, MME advisory board member JP Whitlock realized the potential for the CLEAN benches within a new development at IMTECH-OR. And so the building began.

After working with faculty and staff to establish the purpose and use of the table the follow SolidWorks drawings were created. Ultimately, some of the dimensions and connection methods were altered but the following two documents demonstration our original design intent (CLEAN Workbench Isometric Drawing, CLEAN Workbench Dimensions).

This process began with a maple butcher block 68.5 inches long and 28.5 inches wide which would serve as the work surface for the CLEAN bench. After being securely fasted to an existing workbench to prevent any unwanted movement during manufacturing, 5 equal spaced holes were drilled on to each of the long ends of the maple block. Threaded inserts were then set into the each of these holes. These were to be used as anchor points for the extruded aluminum that would surround the wood block. Holes were then drilled into the 68.5 inch piece of extruded aluminum, using a drill press, at intervals identical to those on the side of the work surface. The extruded aluminum was then fastened to the wood using socket screws. The ends of extruded aluminum were then tapped to allow for the attachment of a rounded corner piece. End pieces were then cut to 28.5 inches to fit along the bare edge of the maple butcher block. Legs were then cut, tapped and attached to the workbench frame using brackets. Casters were screwed into the end of the workbench legs and the legs were supported using a crossbeam. Awaiting the finishing touches, this prototype CLEAN workbench provides a base model for students to build from. CLEAN Workbench #1 was finished January 24th, 2017. Although, it this process was long and much more arduous than expected we believe that this will serve as a model for many workbenches to come. We are excited to see where future students take this project. Ryan, Jake, and Austin’s original presentation is here: Cougar Lean Workbench System. The Spring 2017 ME 415 class took the Cougar Lean Workbench System idea, and created four functional workbenches, which will be used by future WSU engineering students to facilitate their design projects. Below are the details of how the CLEAN workbench developed from the prototype design. 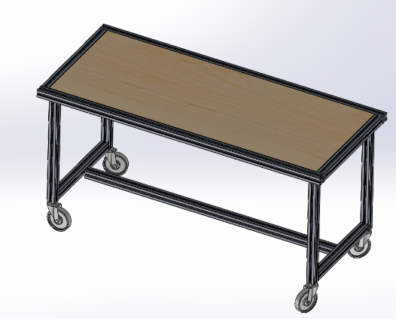 The final design for the WSU CLEAN Workbench System

While the primary focus of the Spring 2017 ME415 class was to gain experience with the real-world design process and with maintaining an open dialogue with a client to ensure that a quality and functional design was developed, another focus of this class was to build on improving WSU’s ME design workspace through the Cougar LEAN (CLEAN) workbench system proposed by three ME seniors, Ryan Pitzer, Jake Enslow, and Austin Rapp. Although the current design space used by ME students to work on projects is satisfactory, the CLEAN workbench system would provide students with a better and safer space to allow design projects to come to fruition and to build experience in hands-on problem-solving, which is paramount to a burgeoning engineer’s skill set. In having a better design space, it is hoped that WSU ME students will be encouraged to more actively apply classroom knowledge to create innovative design solutions for any problems they may be tasked with, which may be related to something as simple as a class project to something as complicated as a senior capstone project. Once the workbench, which was specifically designed to be meet our client’s cleanroom needs, was designed, and a plan was developed to manufacture several of these cleanroom workbenches, the Spring 2017 ME 415 class began production of the CLEAN workbench system. Although the prototype for the CLEAN workbench system had been developed, the processes involved in the manufacturing of this workbench needed to be optimized for efficiency such that multiple CLEAN workbenches could be uniformly produced to outfit the entire ME design space for future WSU ME students. Furthermore, it was important that the optimized manufacturing process outline the entire part ordering, part cutting, and assembly steps, so future WSU ME students could reproduce the CLEAN workbench without difficulty in the case that more CLEAN workbenches were needed for the WSU ME design space. 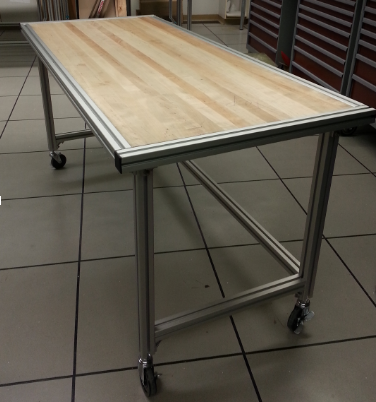 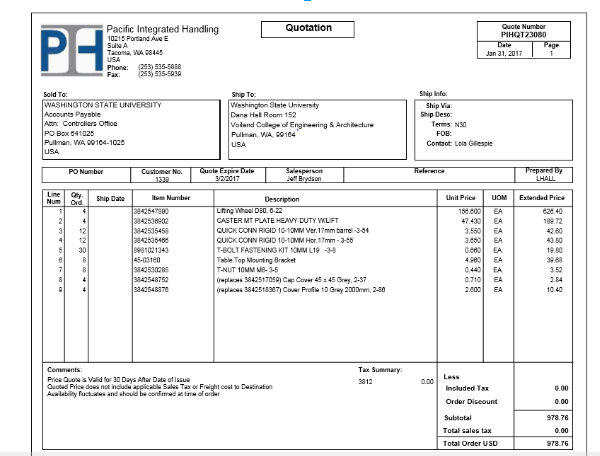 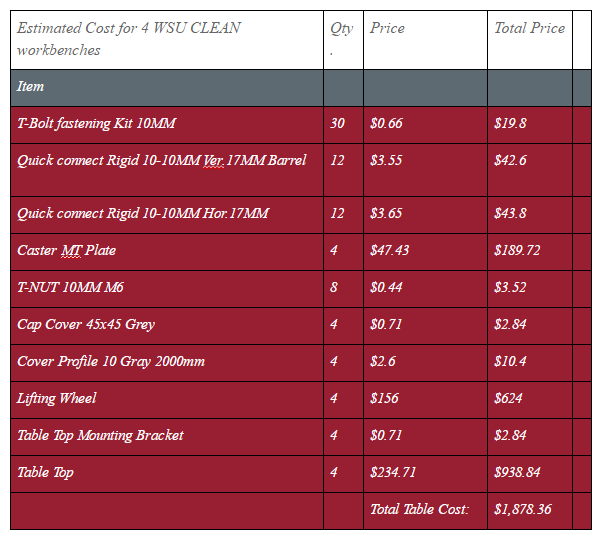 *Mark and cut 1-by-1 to account for blade width loss of material. 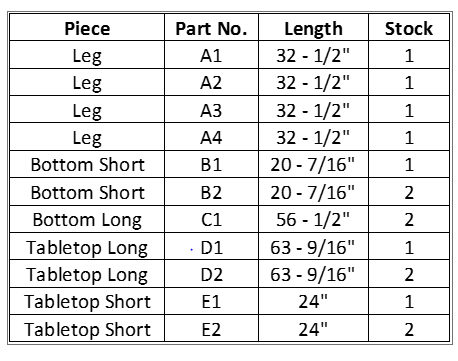 *Not including table top, that will be hand-drilled.

Drill 2 holes total, 1 on each side and oriented in the same direction.

*Part No.’s are listed on the CLEAN Workbench cut list. 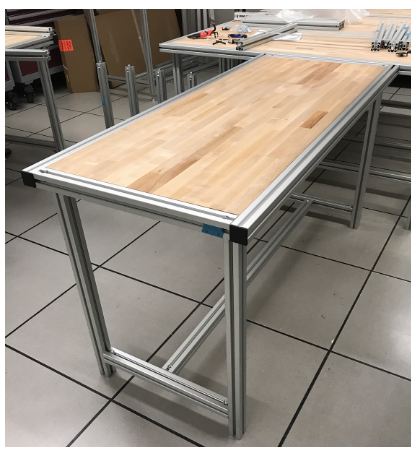 The CLEAN Workbench has been assembled from all of the cut pieces. Casters still need to be added to the workbench assembly. 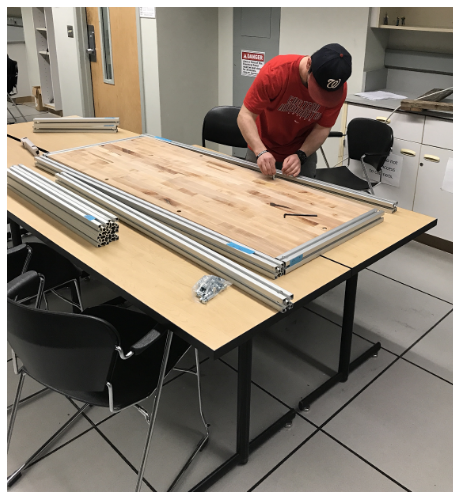 The CLEAN Workbench is being assembled. 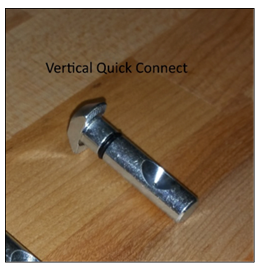 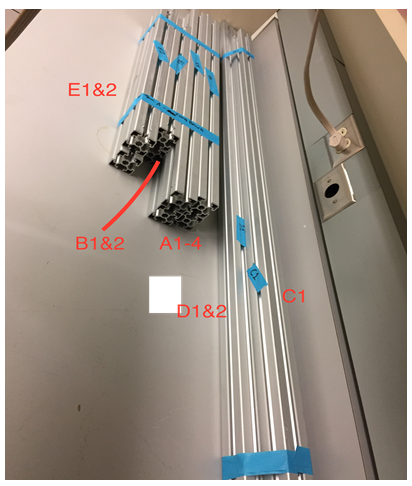 Figure 2: The cut members needed for the CLEAN workbench system. 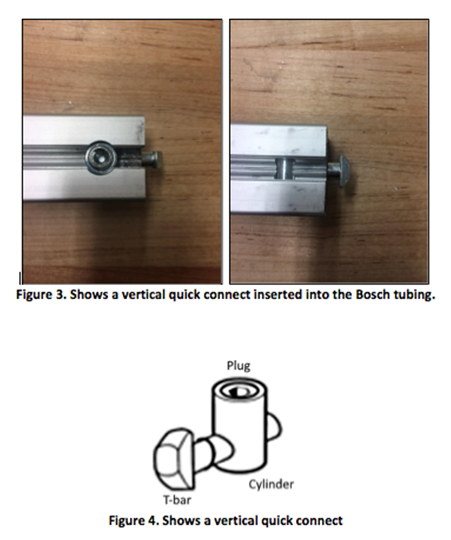 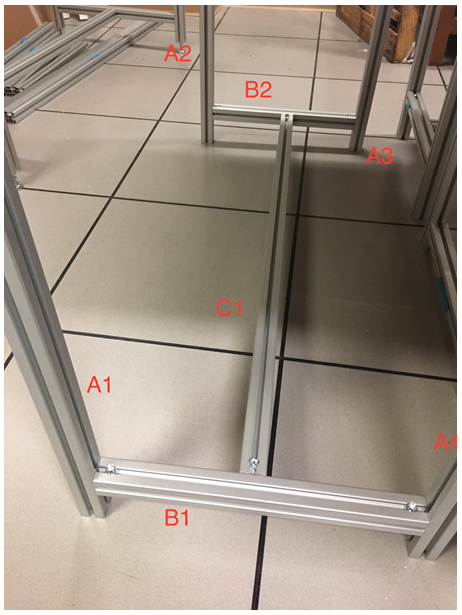 Figure 5: The members of the frame for the CLEAN workbench 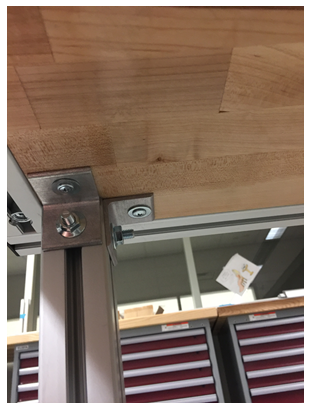 Figure 7: The angle brackets connecting the wooden tabletop and the legs of the CLEAN workbench 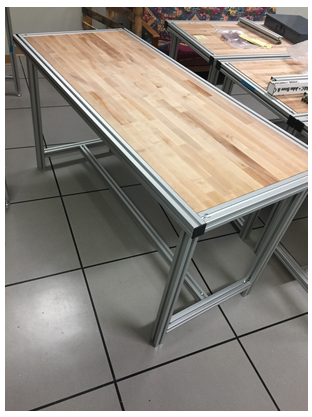 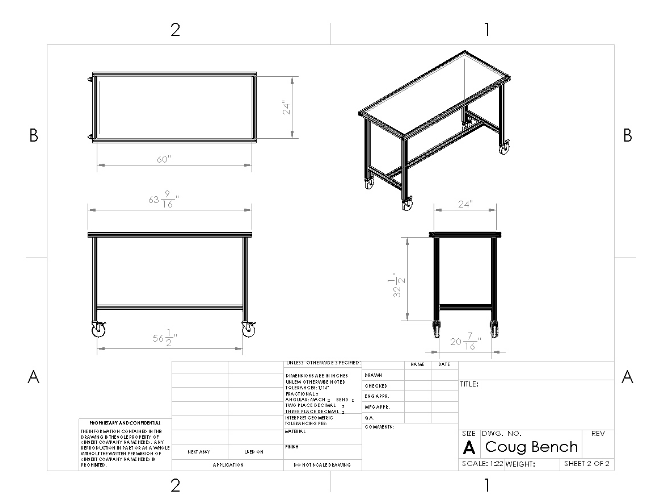 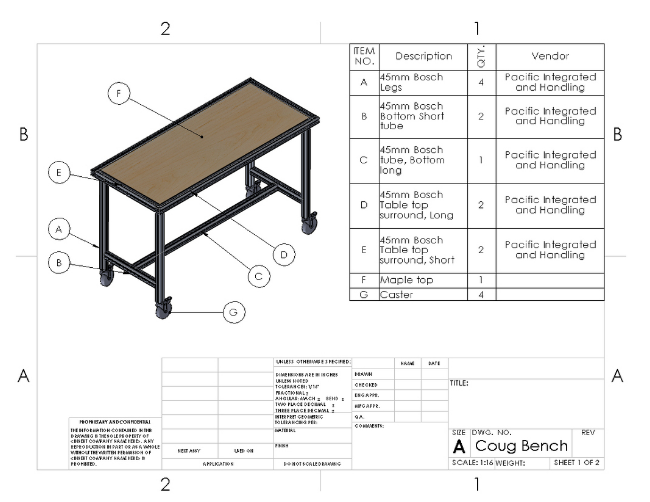 Figure 10: SOLIDWORKS drawing of CLEAN workbench with bill of materials